I have heard it said that dermatologists have a good gig. Their patients never get better, but they never die. Forget being a dermatologist. I want to be one of their patients. I’m not sick, so no getting better is required. But it would be so cool to live forever! And that’s why I went. Not because of that annoying mole.

In order for my insurance to cover a visit to a specialist, I have to get a referral from my regular doctor, and I think a personal request from God, himself. On the day of the appointment, I gathered the paperwork I had been sent. All of the relevant information had been included except for an actual address. No worries there, though. Given her magical abilities to grant immortality, I was pretty sure her office was located in a cave or a castle, which narrows the search considerably.

I did find the office because I am just this side of magical myself. I signed in at the front desk and waited for the paperwork that required me to be there a full fifteen minutes early. The receptionist possessed some magical traits of her own, such as the ability to avoid making eye contact. But I was toddler-free and holding a good book. I sat down to wait.Forever, if it came down to it.

Only after those fifteen extra minutes had expired did “Bonnie” hand me the forms and ask for my insurance card. And my driver’s license. As everyone wants to be me, I totally understand why I should need to prove that I am, indeed, the real deal. I handed her the license. So she looked at it, looked at me, looked at it. When I asked if I could have it back, she narrowed her eyes and said “No.” I backed away slowly, unsure if her powers included breathing fire.

I dutifully filled out the volumes of forms, including one asking the reason for today’s visit. Interestingly, immortality was not one of the choices. Maybe that’s just a given. Not wanting to look like a total novice, I wrote “little mole.”

The nurse, whose powers of friendliness rivaled that of the receptionist, instructed me to put on the gown, a glorified paper-towel with arm holes. A cheap, generic Wal-mart paper towel with quality control issues. As I unfolded the thing, it ripped all the way down the front. Fantastic. But the doctor probably has x-ray vision anyway, so I decided not to worry about it.

The visit with the doctor herself was the shortest part of the whole deal. A little sawing, a couple of band-aids, some smelling salts, and I was all done. If results are good, I don’t have to come back for a year. Yippee.

I went to check out. With Bonnie. She shook all the money out of my wallet in return for my license, and I asked her if the office sends reminders at the one-year mark. “If you don’t make an appointment today, we have no way of contacting you,” she said flatly.

So if I skip out on the bill, they will never be able to find me? Even though they have my name, phone number, insurance information, mother’s dog’s name, and an actual street address? Immortality and invisibility. This pleases me. 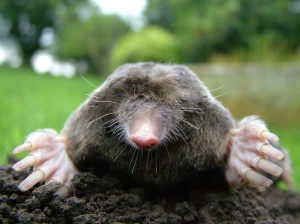 Here's hoping that they are just garden variety moles.

Photo: Wikipedia. They have good pictures of moles.

40 thoughts on “Slip Me Some Skin”