Here’s an opportunity to judge me. I have not had professional family photos taken since 1999. I will wait while all you moms and dads and grandparents take a moment to gasp in horror. Finished? Now we’ll continue.

That’s not to say we don’t have pictures. I take pictures. A lot of them. Each year, I put together a family album of the year’s best photos. Last December, I had 680 to work with. And keep in mind, I said the best photos. That’s not counting the pics that I deleted because they were blurry/redundant/boring. This year, I have already uploaded 450 pictures. In three months. I think I’ve got a few pictures of my kids.

I never saw the sense in paying big bucks to drag my unwilling kids to a studio where we’d spend thirty minutes in awkward and unnatural poses to purchase shots that will never grace our walls. And the smallest portrait package available contains more photos than we could ever possibly give away. Years later, we find the leftovers and are reminded of how much money we wasted and what pathetic, friendless losers we are. No thanks. 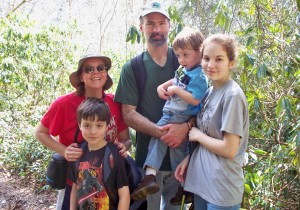 MY kind of family portrait.

But we recently sat for one. Because our church is creating a new directory, and they’ll only give copies to people who are in it. A directory is kind of important when you have the facial recognition abilities of a fire ant, and you’re active in a fairly large congregation. To save myself a great deal of “I’m sorry,I know you’ve sat two pews in front of us for the last two years and we served on a project together, but what was your name again?” fun, we got the picture taken. And it was just as exciting as I had expected.

In order to get there on time, I had to leave the zoo where I was watching a tortoise hatch. Smile for the camera! Squish is possessed of a crippling shyness in front of people he doesn’t know, which often manifests itself as a terrifying frown. Let’s capture that forever memory, please. And the Princess of Darkness had spent the entire morning being pummeled by four-year-olds. Is everyone ready to say cheese?

Thanks to the wonders of technology, we were not permitted to crawl away to lick our wounds after the ordeal. We had to take a seat in the waiting area as the pictures were downloaded for our viewing pleasure. Yippee. The moment the images downloaded, we were ushered to a windowless room, ostensibly to better see the computer screen, but I suspect to keep us from leaping to our deaths when we saw to the price tag.

I have been in hard sell situations before, but this one took the taco. The directory photo was free, of course, but the matronly saleswoman, undoubtedly concerned about the preservation of precious memories, didn’t want to take “Where’s the price sheet?” for an answer. She asked “How many grandparents do we need to take care of? And what do you need?” Need. It was on the tip of my tongue to say “Lady, in the best shot you took, my nine-year-old looks like he’s deflating, the girl-child looks like something smells funny, and I’m smiling like someone stuck me in the bum with a pocket knife. How much of this do you think I need?” But I didn’t . Because I have good manners. And I am a coward.

I have decided that the next time we sit for a family portrait, we will do so dressed as Smurfs. I had the chance this time, and I didn’t seize it, and I’m not one to live with regret.