Where do roofers go? I don’t mean that in the disappearing kind of sense. I mean peeing. Because I live with a toddler, and elimination is at the center of our world. Where do they go?

I was taken quite by surprise when I was scheduling the job and the roofer explained to me that he wouldn’t need access to the house. I expect any project that lasts over three hours to require the use of facilities of some sort. Truthfully, ever since I, at Celi’s recommendation, began consuming 32 ounces of water each morning when I wake up, the thought of being barred from a bathroom for longer than 20 minutes makes my eyes cross. Where do roofers go?

When we had our foundation rebuilt several years ago, it was a five-day job. The contractor had a porta-pot delivered to the premises so that the workers need not rap on my door all day long in order to use the powder room. I thought that was a splendid idea, so much so that I called my husband who was out of state on a business trip and told him I had added a half-bath. Alas, the company wouldn’t let me keep it. Although they did leave it sitting in the yard for so long that I bought a Christmas wreath to hang on the door. No joke. No sense in creating a blight on the neighborhood, right? So where do roofers go?

They’ve been here and gone. But did they “go?” They were here for eight solid hours. The houseplants on my deck are dry. Where do roofers go?

Do they wear Depends? I see products for men and for women, but nothing specifically for roofers.

Are they part camel? Do they drink only once a week? I know I saw at least one guy with a Big Gulp cup. Maybe it was actually empty when he arrived?

There is one unpleasant possibility. Maybe they don’t ever actually need to use a restroom. The house is two unfriendly stories tall, and there’s a 20 foot drop on three sides.  One little misstep would take care of it for me… 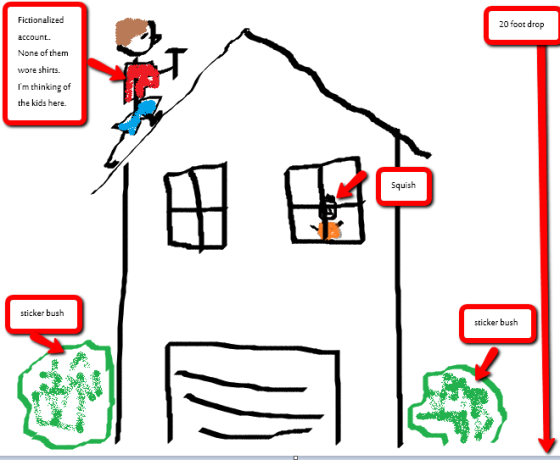 Where do they go? Seriously, I’m afraid my guess is right.

Tomorrow is the last day to enter my giveaway. I even found a bonus item to throw in that I had forgotten about. Enter here. It’s relatively painless.

16 thoughts on “Another of Life’s Great Mysteries”