I did not love it. I am not even sure if it was The Hulk or just Hulk, and I don’t care enough to Google it, or even go downstairs and look at the DVD cover. The happy news is that I spent no money on it, since it was a free loan from my library. Unless I forget to return it today. Then it will cost me a buck, and that would be one dollar too many.

I didn’t hate Hulk, really. The story line was just okay. All the superhero movies get a little tedious as they give the back story on how said superhero acquired their powers, and this one was definitely no exception. There were some disturbing moments, and some of them seemed unnecessary. It was like Ang Lee couldn’t decide if this picture was going to be dark like Batman or not. I guess that was his goal because he was either going for dark and scary or flat and forgettable. Truthfully he vacillated between the two.

I wasn’t completely engaged in his version of the pre-monster story. I’ll be the first to admit that I haven’t read the comics, but I grew up on The Incredible Hulk TV show. I think David Banner may have been the first broken, brooding man I ever gave my heart to. And Lee’s version stomped all over my treasured memories. To add insult to injury, Lee didn’t even use the theme song, a tragic oversight if ever there was one.

The acting was, um, something. Yes, something. I know that Bruce Banner was supposed to be reserved, keeping all his emotions locked inside. Ham-handed dialog gave me that insight within the first 10 minutes. Apparently, all the other characters were, too, since they all offered the emotional depth of a popcorn carton. Maybe this was all as Lee intended, and short of hiring Kristen Stewart to play ALL the roles, this cast was the best he could come up with.

It sometimes seemed like Lee hadn’t actually read the script because all of a sudden, the dead-pan lead character is advised to “get ahold of that temper.” Temper? Really? I would give my life-size Severus Snape cutout (hey, sweetie! If you’re reading this, I’m getting one. That’s okay, right? I promise to keep him on my side of the bed!) to have a kid whose tantrums were pre-Hulk Bruce. I’ve had flip-flops with more emotional instability.

Anyway. The story wasn’t horrible. Except for the part about the mutated Poodle. Poodles are German, Lee, not French. Do your research! I’m not sure if scary poodle was supposed to be funny, or if it was supposed to take the sting out of Lee’s stereotypical use of Pit Bulls as vicious attack dogs. I was lost either way.

There were some very technically impressive, though not very interesting, scenes where Hulk bounds through the desert like a giant green bunny. There was also an extended shot of the backs of my eyelids. Or maybe fell asleep. I’m not fussed about it. I can pretty much fill in the blanks. Hulk bounces around. He smashes some stuff. He said “Puny human” once. Which made me ponder the frailty of human existence. Or not.

I asked my husband if Hulk killed the bad guy. He said “Um, I think so?” Which pretty much says it all. Will I see the others in the series? Only if Mark Ruffalo is actually in them. He nailed Hulk in Avengers. Would I recommend it to friends? Sure. Watch this movie if you have nothing better to do, like painting the dog’s toe nails or regrouting the bathroom. 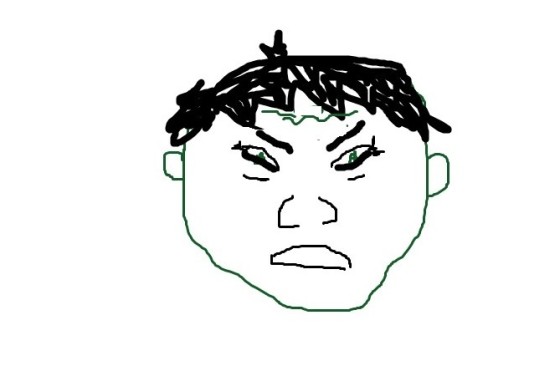 16 thoughts on “A Day Late and a Dollar Short Movie Review: The Hulk”