In yesterday’s post, I featured photos of two tiny bog turtle babies. They are roughly the size of a June beetle and hide like you wouldn’t believe, so I was delighted to be able to photograph them this young. As promised, I’ve got some other tortoise-y cuteness to start your weekend with.

For starters, here’s our newest hatchling. 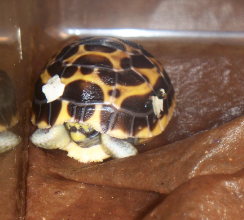 That’s a bit of egg shell on its carapace. A brand new hatchling.

It’s a Pyxis arachnoides brygooi, or Northern Spider tortoise, one of the species of dwarf tortoises from Madagascar. The breeding program at our zoo is top notch. This is the ninth brygooi to hatch this year, and the 28th overall. Not too shabby considering that the first successful hatching in the entire country didn’t occur until six years ago. And you guessed it. That first hatching occurred at our zoo. 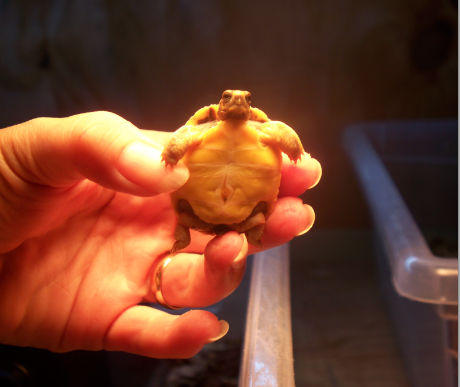 Because everyone loves a belly button image. Look at that little face!

And now an update on a pair we’ve been following for awhile. It’s Nash and Navi! The link takes you to the day that they hatched, way back in February.

They have really grown, but they’d still fit in my pocket. If I was so inclined. And if they wouldn’t pee on me.

Back in July, the pair weighed 52 grams combined. That’s the equivalent of about 17 American pennies. Nash was the bigger of the two by about 2 grams. Today, they tip the scales at 30 grams each! Navi was the tiniest of all the Indian Star hatchlings, but she has caught up. I wonder if she’ll pass her sister.

She looks like she’s been dining on powdered sugar doughnuts. It’s calcium powder, good for building a strong shell. 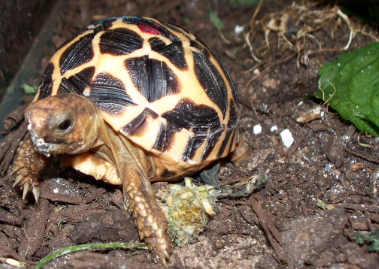 To get an idea of her size, that’s a clover bloom on her right.

And one more friend before we go.

Pyxis arachnoides oblonga, the Southern Spider Tortoise.  This one is my current favorite in the collection. Because I can play favorites if I want to.

Happy Friday, friends. If you’d like more tortoise updates in the future, be sure to say so in the comments. Someone I know doubts that people enjoy my tortoise posts as much as I do.

49 thoughts on “The Post So Exciting I Forgot to Title It.”