Ever have one of those days where everything goes wrong? Where you oversleep and miss breakfast? Where you’re late for work and are on the boss’s bad side? For the third time in a week? I watched a day like that unfold, but not from a safe enough distance.

I swear it wasn’t me. If it had been me, you would never be reading this. I was an accomplice of sorts, but I didn’t start the whole mess. Please believe me.

I’d like to introduce you to my co-worker, Stephanie. She and I shared an office a few years ago. Names have been changed to protect the innocent, or in this case the not proven guilty. Stephanie was a sweetheart, though maybe a little flighty. She meant well, and she tried hard, but our boss was not her biggest fan. Stephanie was the one who showed up late at least a couple of days a week because her car wouldn’t start, and she had been sent home a couple of times for Dress Code Enforcement, but she never did anything really bad. Except for once.

I remember her dashing into the office, late and breathless. I don’t remember what the excuse was. I do remember that she was complaining because she missed breakfast, and she’d had to pack one. She’d have to be super sneaky because we weren’t supposed to eat at our desks, and our boss was just around the corner. I was busy with my own stuff, so I tuned her out. Until…

Considering the source, that could mean anything from “I just sawed off my leg and fed it to a shark,” to “My roommate ate all my Captain Crunch,” so I still didn’t pay her any mind. I think it was the frantic whispered swearing that finally made me look up from my reports.

Stephanie’s eyes were as big as grapefruits, her face bloodless and pale. “I am so fired” was all she could say.  And she was right. Violation #346 sat right there on her desk.

On her way out of the house a few minutes earlier, she had reached into the refrigerator for this: 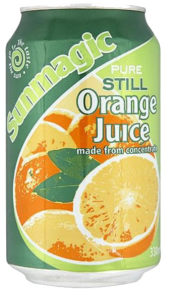 But sitting on her desk was this:

Yeah, that. And did I mention that we worked in a preschool? A federally funded preschool with rather a poor view on its employees consuming alcohol for breakfast? With a boss sitting just around the corner?

I didn’t know whether to laugh or pretend I didn’t know her. That’s not true. I laughed. Quite a bit, actually. And then I got worried because though our boss’s sense of humor had been surgically removed years before, she was pretty darned good at sniffing out shenanigans. We heard her coming down the hall.

I like to think of myself as a quick thinker, but honestly, the Three Stooges would have handled the situation with more aplomb than Stephanie and I did.

Given that Boss Lady lacked  mind-reading talent and the ability to see through walls, we could have:

c) hidden it in a purse or brief case

d) dropped it into a garbage can and covered it with, well, garbage

Here’s what we did instead:

She freaked out and threw it to me like it was on fire. I threw it back at her like I didn’t want to be on fire. Or fired. She fumbled and dropped it on the floor, then accidentally kicked it. I grabbed it and pushed it into her hands, she thrust it back at me. I was quitting anyway, so couldn’t I just take one for the team? Finally, I tucked the thing into my bra (don’t ask) and walked very carefully outside and tossed it in the dumpster.

Never let it be said that I don’t work well under pressure.

32 thoughts on “A Case of Mistaken Identity”