Sometimes you only think you’re taking one for the team.

It’s Spring Break. I know. Technically, it’s not even Spring. I don’t get to make these decisions.  When given an entire week of nothing, I’ve learned it’s good to plan at least a little something lest the critters get restless, so I planned a trip to the Tennessee Aquarium. I spend hours each week in a zoo already, but I do love to visit other facilities. The Padawan has had his heart set on being a marine biologist since he was three. We’re members. We make the trip several times a year.

That being said, we’re members. We visit several times a year, and we have done so for ten years or more, thirty or more visits. After a while, I feel like I’ve seen what there is to see. I do have my favorite exhibits. Turtles, anyone? But lately we haven’t been spending as long in each building as we used to. We know what’s there. We’ve read the signage. We’ve been, we’ve done.

And then there was yesterday. At first glance, our choice of days seemed a poor one. The place was crawling with kids; swarms of them, busloads of them, schools of them. But we’d made the two hour trip, so we were there, for better or worse. It was for better. When we picked up our tickets, the young lady at the counter advised us as to the location of a table where we could sign up for behind the scenes tours. Actual tours. Behind the scenes. For free. So we did. And that’s where we met Mr. Bill.

For our first tour, he took us behind the scenes in Rivers of the World and let the kids feed the fish. Those same fish we have been pals with for ten years? Yeah, my kids got to feed them. Mr. Bill handed out little handfuls of pellets and explained to the kids how to do it properly. He taught them about the species and how to identify males from females. And despite the distractions around them, his audience paid close attention. The man knows how to talk to kids. 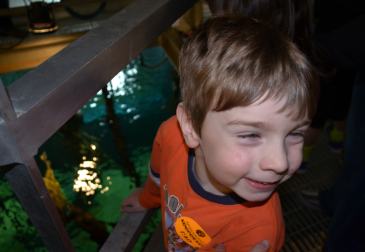 How cool is this? No swimming, right?

I’ve kept fish for close to thirty years. Wow, does that make me feel old. I’ve fed them hundreds of times. No biggie. But the kids getting to help take care of a collection of fish at a world-renowned aquarium? That, friends, is a biggie. Even for the most jaded of folks.

Our second tour met right after we finished the first one, and it was with great delight that we saw our guide was none other than Mr. Bill. He led us to a classroom deep in the heart of the building and gave us an up close and personal encounter with my favorite things: turtles and toads.

We met an ornate box turtle who made quite a show of trying to snap his handler’s fingers, a snapping turtle who was far more docile, and a barking tree frog. 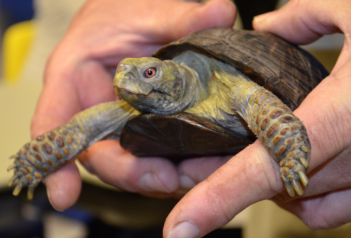 Ornate box turtle with an appetite for fingers. No touching!

I can’t pick a favorite. Oh, who am I kidding? Of course I can. It’s this guy. 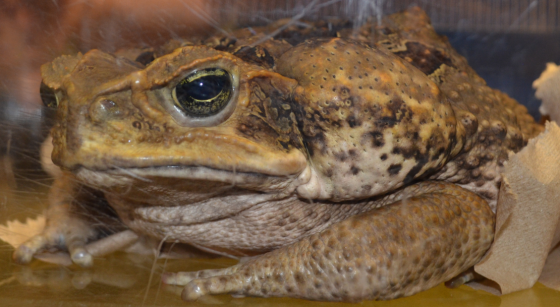 Marine toad. He’s as big as he looks, about six or seven inches across. Invasive in Australia, but look at that face!

I’ve kept reptiles and amphibians for thirteen years. I have acted as an educator in a zoo for almost as long. And Mr. Bill still taught me some stuff. That’s no small feat.

When we were finished with our tours and encounters, we were all set to enjoy the rest of the afternoon at the Aquarium, and we did. But I didn’t need to. The hour we spent with Mr. Bill getting to see things we had never seen before were worth the two hour drive. If I hadn’t gotten to see another thing, I would still have left happy.

Thank you to the Tennessee Aquarium for offering the Keeper Kids program for free during Spring Break. And thank you to Mr. Bill for breathing new life into some old favorites. I’m tentatively planning another trip down this week. That’s how good it was. If you have a kid in your possession, or if you can borrow one (I cannot advocate stealing, though), hop in the car before April 15 and head for the Tennessee Aquarium. Spaces in the tours are limited.

But then he wouldn’t leave. Attention hog!

Oscar the sea turtle. He lost his back flippers in an enounter with a boat propeller, and now he lives here.

Baby gators. The smallest I have ever seen. On loan from St. Augustine, another recommended destination.

This post wasn’t sponsored in any way, shape, or form by the Tennessee Aquarium. No octopus or marine toad changed hands. Although if they’d like to make an offer, I’m listening.