Remember this little guy? He is a tiny miracle of a Radiated Tortoise (Astrochelys radiata) . His egg had been broken during excavation of the nest (we have to excavate them or the eggs will die), and his keeper had carefully replaced the broken bit of shell and hoped for the best. And out he came with only a small cosmetic defect in his shell.

Now Meatball is a year old, and my how he has grown! 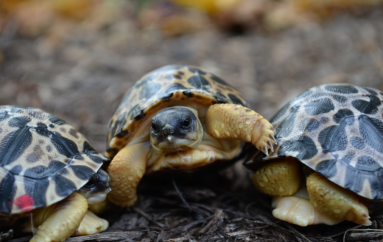 How do you get bigger? By eating! Meatball never stops!

I give Meatball snacks on days his keeper isn’t there. Because they NEVER STOP EATING!

Right before Christmas, guess what? Meatball had a baby brother!

Radiated Tortoise says it is going to have to odd, because it just…can’t…even…

The hatchling should be a male because it was incubated at a lower temperature – 84F. A temperature of 88F produces females. This minute difference in temperatures is one reason why climate change can have a devastating impact on a species. A few really hot summers can result in more females than males, which sounds great at first glance. But too many females in the breeding population can very rapidly reduce genetic diversity.

This baby popped out right before Christmas. What a great surprise! The eggs weren’t even expected to hatch for a few more weeks. We check eggs every morning and afternoon, because we never know for sure. It’s not like incubating bird eggs, where there is only a day or two of variability in expected hatch dates. There can be MONTHS of variability. Like now. SURPRISE!

Now, back to Meatball. It’s hard to see how much he has grown in the last year until you see him beside his new brother. So here ya go! 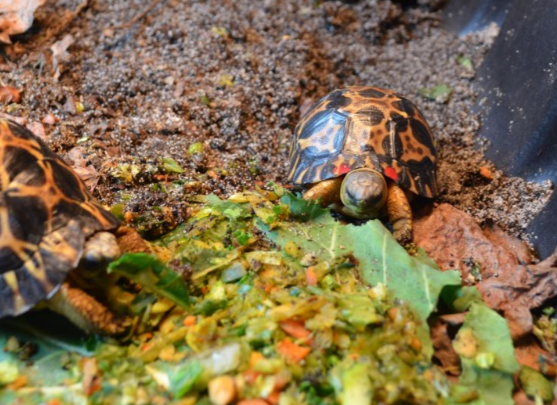 Meatball’s brother (so far nameless). He likes his collard-green plate more than his chopped greens and veggies.

And here are the two of them together. 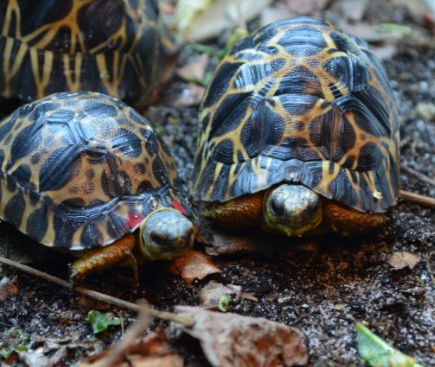 There are still a few more eggs in the incubator, and Mom and Dad have done such a good job making babies that they no longer have the recommendation to breed, so we will be getting a different pair to work with. If we fill up zoo holdings with animals that are closely related, there’s no room in captivity for genetic diversity. Most zoo animals only have a few offspring. It may be a little while before we have more baby Radiated Tortoises. That’s okay. They’re worth waiting for!

What’s exciting in your world? I want to know!

I missed last week. It wasn’t that I had nothing to say. Trust me, I had LOTS to say, but I ran out of time in which to say it. We went to see Lego Batman, and it was past my bedtime when we came home. I’m planning ahead this time.

Our zoo works with many endangered species of turtles and tortoises, and in most cases, our goal is to breed them. With few exceptions, these animals are sneaky when it comes to nesting. They create a nest chamber, lay the eggs, and then cover it up completely with any material in the vicinity. Unless you catch them digging, you’ll never find the eggs. It’s difficult in captivity, too. Sometimes the nest is hidden so well that our only clue that they have laid eggs at all is the mud on the back of their shells.

Check it out! She is digging a nest for egg-laying! Note the dirt on her back. She kicks up quite a bit of it as she digs.

Indoor enclosures are smaller, so there is less surface area to cover, but it’s still tricky. Looking for loose soil will get you nowhere. A female will soak the dirt with her own urine to pack it down. And digging straight down yields nothing. The nest tends to hook around in one direction or another to throw off predators. Luck is the best guide.

Sometimes things go wrong. It has happened to all of us. If you’ve spent any time breeding wildlife, the unthinkable will occur. It happened to my co-worker. She had located the newest nest of Radiated Tortoise eggs, but then while digging them up, she broke an egg, a large piece of it falling off in her hand. 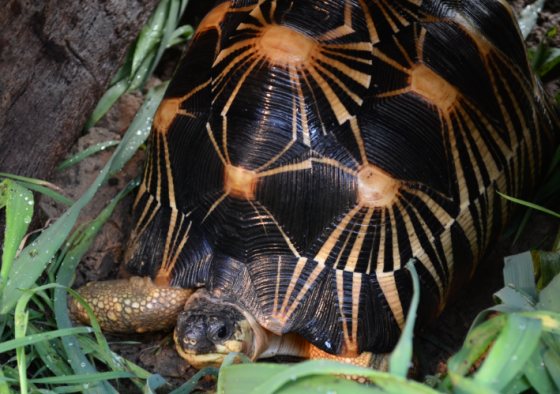 Sub-adult Radiated Tortoise. This species has seen a 50% decline in wild populations in the last 10 years 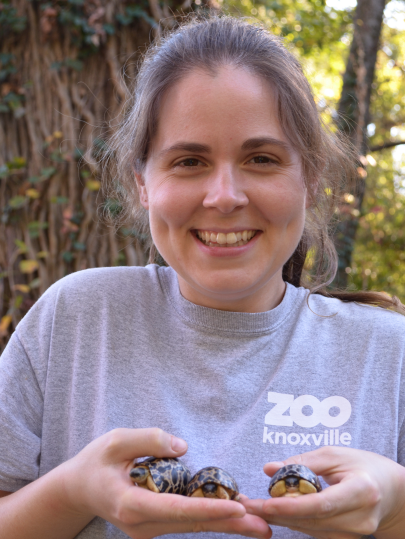 It’s a terrible feeling, the crushing weight of all the what-ifs. What if the egg was fertile? What if it was the only one in the clutch to be fertile? What if the female never laid anymore? When I inadvertently broke an egg, I had to go to bed early. My co-worker holds our institutional record for Radiated tortoises. Doesn’t matter. It still hurts.

But maybe all was not lost? The shell was broken, an inch-and-a-half piece gone. But she noticed that the membrane inside was still intact. There was no way to wash the dirt off of the egg like we usually do. There was too great a risk of introducing bacteria through the thin and porous membrane. She chucked it in the incubator, dirt and all, and carefully balanced the broken piece of shell over the gaping hole. And hoped for the best.

And sometimes hope is not misplaced.

His head pokes out of the egg just a little bit. The broken bit of egg that was used as a patch leans up against the back of the egg

Meatball is still not convinced that he wants to come out.

Meatball says maybe. The patch lays behind his egg. Look at how big it is!

We call this baby “he” because this species has temperature-dependent sex determination. The temp the egg is incubated at can determine gender for many, many species. An aside, climate change can have devastating effects on such species since only a variation of 4F degrees determines gender. Another aside, I cannot spell “devastating” without help from spell-check. 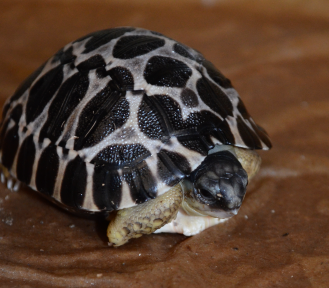 Hello, Meatball! The little crumb on the end of his nose is his egg tooth. He used it to break out of his shell. Here’s the funny part. He didn’t break through the membrane where the shell was missing. He turned the egg upside down and came out the bottom!

And there’s the belly button! I am in love with the pastel on the top of his plastron!

The only evidence of his precarious beginnings is the number of scutes on his shell. All species of turtle and tortoise in the world, from the tiny Padloper to the biggest Galapagos Tortoise have the same number of scutes (scales) on their shells. There are 22 around the bottom margin (appropriately named “marginal scutes”) and 13 of the bigger ones. Native Americans even referred to the calendar as “13 moons on the turtles’ back” because there are 13 new moons in a year. But sometimes incubation issues can result in too many or too few.

The little zig-zag in the middle is what you’re looking for.

Meatball has a couple of extra ones, referred to as “split scutes.” It is a purely cosmetic issue and only adds to his charm.

Updated a second time to include the best shot of tortoise tushy EVER!

TUSHY!!! Look at those chunky thighs!

I hope you have a great week! What are the miracles in YOUR life?

I admit it. I know I’m not supposed to, but of all the little ones, I have a favorite. Don’t tell the others, please.

I know that all the babies are adorable, but this one has a special place in my heart. The population of the radiated tortoise (Astrochelys radiata) has dropped by half in the last ten years. They have been wiped out of most of their range, so captive breeding programs are of critical importance. She’s the second one my zoo has hatched.

A perfectly proportioned tortoise in a tiny package

Here she is with her older sibling who was hatched in July. I have no idea whether the older one is male or female. Its egg incubated outdoors for a bit, so it was subject to unknown temperatures. Radiographs in a few years can tell if we’ve got a boy or a girl.

One thing I really enjoy about this baby is her personality. She is all go. I have no good recent pictures of her because she won’t sit still. From a biological standpoint, her curiosity isn’t a good thing because she might get eaten, but in captivity, it’s positively delightful.

I’ll be back on Monday full of my tales of adventure. And hopefully with some new pictures. Have a great weekend!

© Heather D. and becomingcliche', 2011-2015. Unauthorized use and/or duplication of this material without express and written permission from this blog’s author and/or owner is strictly prohibited. Excerpts and links may be used, provided that full and clear credit is given to Heather D. and 'becomingcliche' with appropriate and specific direction to the original content.
Loading Comments...