My husband and I are huge fans of Antiques Roadshow. They do their filming in the summer, traveling to venues all over the country. Every time we get notice that the show is filming within 200 miles of us, we try to win tickets. It’s a lottery. You fill out the online form, and if they pick your name, you’re IN! Or you can buy the tickets. For a $500 donation to your local station. *ahem*

Long story short (too late?), we won tickets. There might have been some joyous leaping about and a few high fives. A low moment followed soon after as we remembered that everything we own is crap. And the rules on the ticket are pretty explicit. If you want in, you have to bring something to appraise.

We agonized. We know our stuff is worthless, so the real challenge was to find things that were the least likely to embarrass us. Our decision was made, of course, as we were walking out the door, as all critical decisions should be. The most important requirement for us was that the items not be too heavy because the free parking is always at least half a mile from the door.

The setup was really amazing, and there were already tons of people there.

That is what is known in the business as a long line.

It was amazing to see what everyone else brought with them.  Click the images to enlarge.

I loved this print so much!

Even before we got on set, a crew bebopped around finding cool stuff to film. Not my stuff.

Me! With tickets! And my items for appraisal. Yes, that’s a shoebox if that gives you any indication of their value.

No cameras were allowed on set, so I have to take you there in my imagination. The set itself was built of blue panels at the center of a giant pinwheel shape. There were openings every 20 feet or so, and three lines fed into each opening. We got tickets for each appraisal line we needed to be in. Since we like each other, my husband and I opted to stay in line together.

Our first stop was jewelry since I had a perfume ring handed down to me by my great-aunt. When I say “handed down,” I mean I swiped it from her jewelry box because no one else wanted it. It looks rather like this.

When we were finally called for our appraisal, my stomach dropped to my shoes. I was terrified he was going to tell me my prized possession was Avon, circa 1982.  He didn’t, though. He was polite and told me it was a nice piece from the 1940’s with “probably a lot of sentimental value.” Translation: “What you have there is a gen-yoo-ine piece of crap. And the perfume stinks.” Value : under $20.

Next up, porcelain. The line was mercifully short. I brought a small collection of tea cups that same aunt had gathered on her jaunts around the world. Turns out, people don’t buy random tea cups anymore. He indicated that if I had a matching collection with a teapot, it might be worth something. Yes, and if a frog had wings, it wouldn’t bump its behind on the ground when it hopped, either. Having expected no better, I wasn’t terribly disappointed. We moved on.

We were left with only our stack of old books and a single comic book from Raiders of the Lost Ark. The lines for both Books and Collectibles were daunting, so we decided to split up. I took the books. And I waited. After about an hour, it was my turn. I brought up my beloved books.

Why are old books so pretty? Ever notice that?

The appraiser was one I see on TV every now and again. A friendly type to be sure. He looked at my books like I had just handed him a turd sandwich and opened them one by one. After a moment, he said “Looks like you picked them up at a library sale.” I admitted that a couple had come from a giveaway bin. He made excruciatingly painful eye contact and said “The free bin is pretty much where they belong.” I don’t know what I expected, but it wasn’t that. I knew my books were not worth anything. I had no idea they were worth nothing.  He went on to say “I can go over them one by one if you like…”

I took my books and slinked off to join my husband in line.

We met the nicest people. The folks in front of us had an old gramophone. We chatted for a good hour and a half.  Actually, it was a great hour and a half. The best part of being there was talking to people and seeing what everybody brought, guessing who was going to be on TV when the show premieres (again, a hint: not me). I even got a peek at one of the Keno brothers! They wouldn’t let us take pictures, so my rendition will have to do: 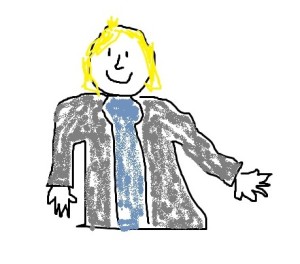 Finally, it was our turn at the table. The appraisers were super-busy and were doing all kinds of research on the items that were brought in, so we had to wait a little bit more. Our gramophone friends found out their player was worth $500. The lady in front of us was told that her silver is a national treasure and was worth $10-15,000. The guy at the next table had a pair of Muhammad Ali’s autographed shoes and was signing the pre-filming paperwork. With each appraisal, my husband’s whimper grew louder. How do you follow up Muhammad Ali’s shoes with a comic book?

With an apologetic smile, he presented his book. The appraiser slid her glasses down her nose and told him the book wasn’t exactly old enough to be an antique. Time to go, honey!

Walk of shame, With my shoebox. Turns out if I dropped it, the stuff wouldn’t be worth much less than it already is.

Was our time at Antiques Roadshow mortifying? You betcha! Would we do it again? In a heartbeat. I haven’t laughed that hard in I don’t know when, and the line about the free-bin was priceless. We’re getting a lot of mileage out of it. But we’d take some different stuff.

Let’s do this again sometime. After the scars heal.

If there’s enough interest, I may do a giveaway of my appraised books. They were worthless before. Now they have provenance.

58 thoughts on “My Fifteen Minutes”